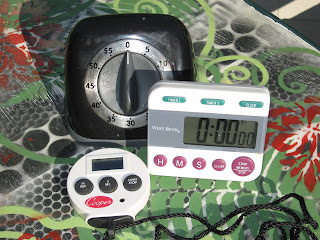 If you don't have a studio timer Go. Buy. One. Just do it. And then use it as a gentle taskmaster.

Whenever I have a job to do that I don't really want to do I grab my timer and set it for 10 to 30 minutes and get to work. When the timer goes off I quit. Sometimes I choose to set it for another short period of time in order to finish the job, but usually that's enough unless it's a big job. At the end of the time I do something I want to do... like enjoy a cup of tea, or look out the window, or walk through my garden. Then I go back to work.

What I haven't tried is to apply this technique to making art. Then I read an article by Robert Bruce about how he sets his timer for 33.33 minutes and proceeds to tackle a copywriting job within his own set of rules. AHA! Why not apply the principles to common studio tasks that are hard to get started such as:
You get the picture.
I've joked about my short attention span when applied to doing just about any type of art; well, it goes deeper than that. I have trouble with routine of any kind, with establishing and maintaining good habits, but since I already know that I like working with a timer on the less tasteful tasks maybe I'll get more accomplished more efficiently if I use a timer.
Posted by Jo Reimer at 5:00 AM 4 comments:

I Was There - Self Portrait Shadows

It used to be that after a trip I'd take our photos to be developed and be so disappointed that once again there were no pictures of me, as if I didn't exist except behind the camera. Then I started insisting that someone take a picture of me, but those, being less than candid, were never very interesting.
Fast forward to a few years ago when I was walking down a street early one morning when the shadows were long; there at my feet was my shadow self... so I took my picture. Now I look for opportunities to take shadow self portraits  wherever I go.
There are no rules about taking shadow self portraits except that you need some sun and you need to make the picture quite early in the morning or late in the day when the sun is low to the horizon so that shadows are cast. The only time when I can't get a shadow picture is when the sun is directly overhead. The higher the sun the shorter the shadow.
Most of the time I don't use the viewfinder on the camera but rather I use the LCD monitor in order to camouflage the camera itself in the resulting photo. The newest point and shoot cameras don't even have a viewfinder.
Move around until your shadow is where you want it. It's interesting if you can arrange to have something in the background that gives a hint about where you were.  And be prepared for a distorted body. You'll look like you've put on several unwanted pounds because of the angle and the clothing you're wearing. This is not the time for vanity to rear its ugly head.
I'm sure you can figure out time of day by the length of the shadow.
Posted by Jo Reimer at 5:00 AM 4 comments: