I resisted going to the Andy Warhol exhibition but my daughter's invitation was too appealing, especially being able to share it with three grandkids. I'm SO glad to have seen this surprisingly moving exhibit of amazing art.


The entry was wallpapered with prints of headlines from the 60s and 70s, times I lived through that moved me to tears, such as the iconic photos of the motel where Martin Luther King was assassinated, photos of  the Kennedy brothers, Rights Bill signed into Law, Men Walk on the Moon.

And then the show itself which was skillfully mounted. At the time they were made Warhol's prints didn't appeal to me, but now! Now I can see and understand that his work added much to the visual history of the latter part of the century with powerful, impactful yet simple works that tell about time in a way that words cannot.

I  still don't like most of Warhol's work, but this show was magnificent, even the grouping of his Electric Chair series. Most are only two colors which gives me an idea for a collage... not of the Electric Chair, but of using such powerful colors together.  I can see a series of collages based on his use of color, somewhat like Leslie Saeta is doing in her 30 Day Challenge where her inspiration is Joanna Gaines homes in the TV show Fixer Upper.


In fact, I got several ideas for collage from this show, especially from the works which feature bold drawings on top of collaged papers such as this series of portraits: 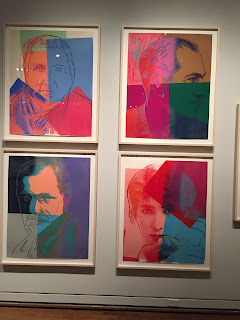 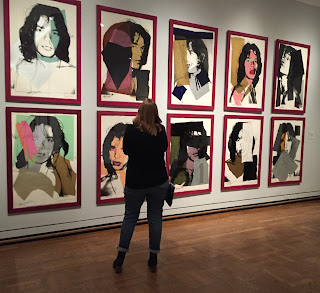 That's my redhead standing in front of Mick. She's a fan.

And on another topic, entirely off-topic as far as ART is concerned but which will interest some of you.... I have released 59 pounds and have reached my goal of living in a right-sized body. I'm easing into maintenance and am holding my weight within a pound or two.  Boy, do I feel good! It's such fun to shop thrift stores and sales racks, on the hunt for small sizes.

Bright Line Eating did it for me.  I began this journey on Dec. 29, 2015 and reached goal weight in the fall. I'm a slow loser. One of my friends has lost 66 pounds in 5 months!  I tried to do it on my own, following the FAA diet plan, but soon figured out that I needed to know more so I signed up for the March 2016 Bootcamp.

If you're interested, the next BLE BootCamp starts this month. The price is nearly half that of previous BootCamps. If you click on this link you'll get access to the Food Freedom Quiz and then receive further invitations to view 3 more videos in the series that explain this method of weight loss.  It's not for everyone. In fact, it's probably not for most people, but for me it worked. I'm a food addict, addicted to sugar and flour. This program removes all sugars and flours from the diet... not easy at first, but like weening off any addiction it gets easier.with time.