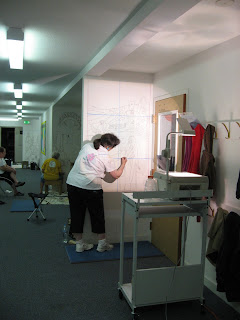 Katherine drawing lines on wall.
I've been helping with a mural project at my church all summer and now it's about 95% finished, all 300 feet of it. Yep, that's right, it's 300 feet long and 8 feet high, stretching the length of the children's nursery wing. Katherine Boettcher, a muralist, designed the project which illustrates all the Bible stories taught in the nursery classes, using photos of zoo animals and many of our children. She projected the drawings onto the walls and we drew the lines on the wall in pencil and then went back and painted over the lines with dark brown latex paint. Then families were invited to come and paint. Here's a video showing us working last Saturday.

Email ThisBlogThis!Share to TwitterShare to FacebookShare to Pinterest
Labels: mural 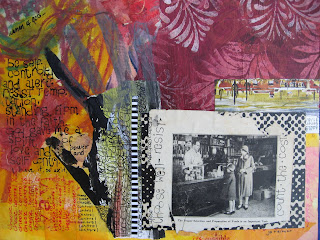 I took my box of compost and some Mod Podge to the beach and managed to extract 2 collages from the collection of paper ephemera. I didn't
know where I was heading with either one but just kept putting colors together to see what came of it. Choose just happened. I used part of some papers I made years ago, literally in the dark.
In a painting class we students were instructed to bring all sorts of non-painting things, arrange them in front of us within easy reach, and put a big sheet of paper was on the easel. Then the teacher turned the lights out, leaving us totally in the dark, and told us to start painting with the materials in front of us.
I don't remember all that I had to work with but I do know that the collection included turmeric, lipstick, eye shadow, and some other kitchen stuff. The painting was really ugly but I've used parts of it in many collages since then, and part of it is what I used here, in the upper left section. The picture of shoppers in an old fashioned store reminds us to choose wisely. And once I started thinking about the night I was choosing non-painting things, my constant choosing of what I eat and don't eat, and my constant choosing between right and wrong the piece came together quickly. 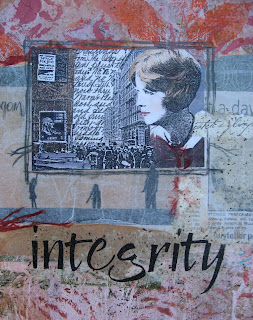 Integrity came together from a prints of another piece coupled with some images from a newspaper that was masked with tissue. The woman is a photo of my mother as a young woman. She and Dad came home from work one afternoon to find that their house had burned to the ground, along with all their possessions. It was during the Great Depression and their situation was dire. Her brother who owned a drug store in PA paid their way north, gave them each a good paying job, and a place to live for the next three years. This of Mother and one of the city crowds by another brother, a newspaper photographer in NYC, seems to tell the story of a frightened young wife with nothing but hope that the future would bring better times. You can faintly see "storyteller" and "catch a glimpse" as well as people reaching up as though they're asking God to step into a tough situation and lift them up. I think Mother would have liked this collage.

Seeing with an artist's eye 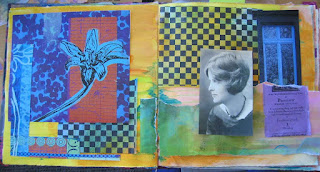 I'm sure you've noticed that I love using my own photos in my artwork and on journal pages. My friend LK Ludwig is offering an online class about making and using photos in visual journaling using a simple Point & Shoot camera, so if you need help seeing your world from an un-ordinary perspective head over to her blog and sign up for the class.
Posted by Jo Reimer at 4:22 PM 4 comments: 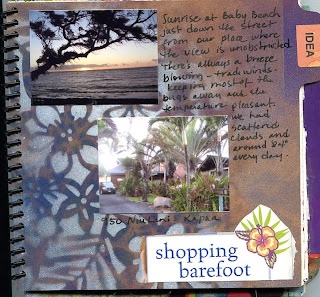 I had grandeous ideas about journaling every day, every time I had a minute to sit down I'd add a sketch or words or paste in some decorative bit of paper, and every day I'd work with my grandkids and help them build their own journal. Right. Best laid plans for journaling never seem to work out for me. Some of these pages have appeared here in my blog as "starts". I added to a bit to them on location but most have been completed since I got home.
I stripped the airline magazine of interesting words and pictures and culled more from a variety of advertising brochures that I picked up in stores or at the airport. These add interest to my pages but they weren't used except to augment entries about something we actually did or saw. 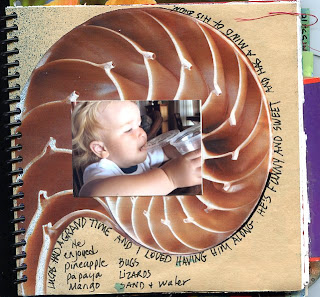 Our grandson, Lucas, added much of the comic relief to our days but he never did get adjusted to the 3 hours difference in time zones, insisting on getting up before the sun rose. 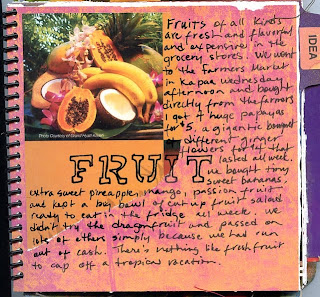 Since this blog is supposed to be about my art-making I'll tell you a bit about how I created each page and if you have other questions just email me. The fruit page was so simple. I used a commercial scrapbooking paper cut to fit my journal and added the text by hand and the title using a stencil. 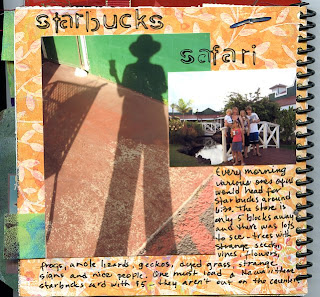 Starbucks is another scrapbook paper with photos and stencil. I'm trying to remember to take shadow self-portraits often. It's usually only possible in early morning or late afternoon when the sun is low. The people in the small photo are my daughter and four grandchildren. 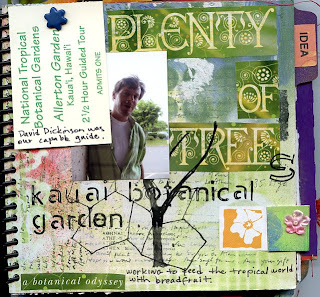 This page was spray stenciled at home and I added lots of bits later. The photo is of my son. 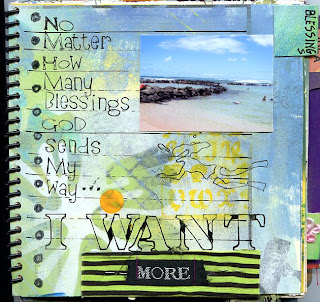 This paper was painted and stenciled at home with a bit of fabric and a garment label stapeled to the paper. 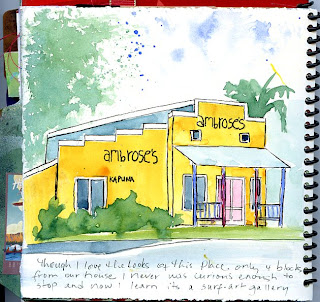 I did this watercolor sketch from a photograph. 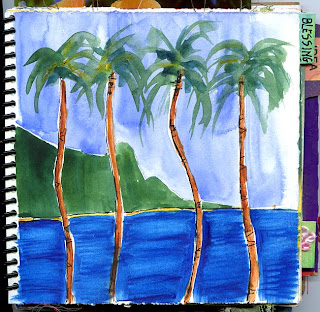 And this sketch is from a magazine picture. I usually don't use photo references from anyone else but this is an exception. 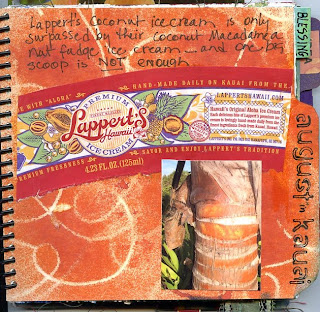 Prepainted paper with label torn from the ice cream cup and a photo of the trunk of a tree. 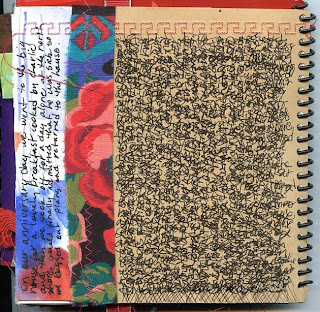 This page was created at home using fabric, paper and my sewing machine, and the writing that can't be read was done on my anniversary when my husband got sick and we had to cancel our celebration plans. I was a little upset but more for him than for me. He so wanted to give me a day to remember and he couldn't help getting sick. We'll both remember this day for several reasons. It really was a wonderful day from the beautiful sunrise to its quiet end. Our precious son-in-law cooked a gourmet breakfast for everyone, we enjoyed time with all our family, and we had some time away in a beautiful place. And when we returned to our house we had peace and quiet to rest and dream and pray. It really doesn't get any better than that. And I didn't have to cook a single meal all day. 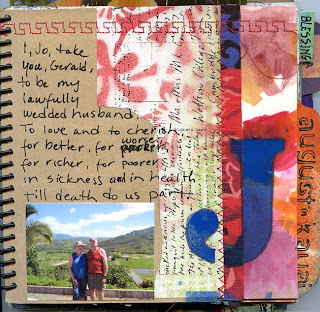 I intended for us to recite our vows for our family and at breakfast I started talking about our wedding day. I described the pink suit i made and wore for going away, with its matching hat, white shoes and gloves, and how we stopped for dinner at a chicken restaurant, and wondered how the owner knew that we were just married. But I didn't get much farther than describing the place we stayed before I got all teary with nostalgea and couldn't go on and pull off the recitation of vows. But we do still love and cherish one another through bad times and good and we'll still be together when one of us dies. 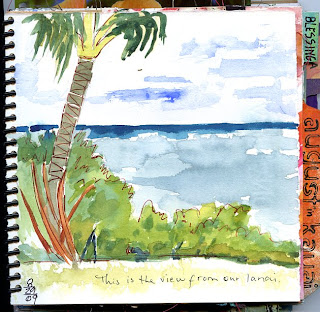 This is the view from our lanai, a watercolor done one afternoon while we were enjoying pupus and drinks. Everyone was fascinated, watching me capture what I saw, and I drew a couple of ooohs and aaahhs when I painted the sky. Some people are so easily entertained! 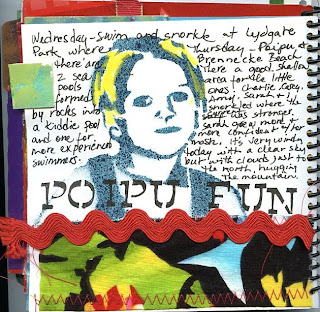 This is a stencil I cut from a photo of my youngest granddaughter, Sarah. She's such a sweetie, full of energy and fun and ideas for what to do next. All the kids are waterbabies and strong swimmers so they all took to snorkeling very quickly, and even had a Snuba lesson... diving with an instructor and their father floating above ready to come to their rescue. He's a certified diver.
Rick rack makes excellent waves aboue a colorful fabric ocean, don't you think? 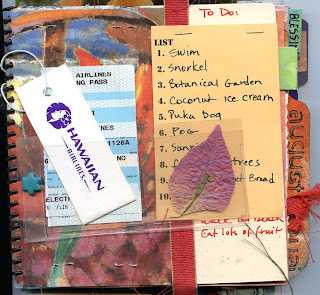 This was my planning page. I added a couple of plastic slide holders to the page and inserted a luggage tag and my boarding pass as well as a bougainvillea flower petal. And I made lists of things I wanted to do.

That's it. I have a few blank pages of watercolor paper and will do a few more sketches in the book but it's essentially finished and I'm ready to move on.
Posted by Jo Reimer at 9:33 AM 5 comments: