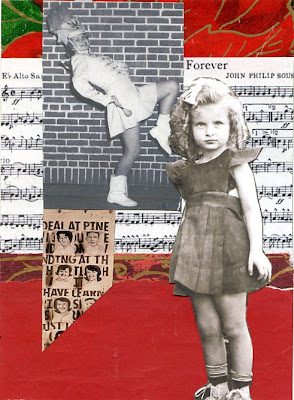 Little Jo Joins The Band
Little Jo's Future Told Through Collage
Sometimes an irresistible notion comes along and all one can do is run with it.  That's what happened with me this morning. I was minding my business, drinking a fine cup of coffee when I thought, "I can use Little Jo to tell my life story for family and friends".﻿ I'll use Little Jo images to look into the future through photographs and collage. And I'll write a short story about that time to go along with each collage.
Oh brother. I can tell right now that this is going to be work.... fun, but work. I'm not promising a story a day; maybe not even one a week. But when the story comes to mind I'll go with it.

Memoir Writing
Many years ago an elderly friend (she was probably the age I am now so she couldn't have been as ancient as I thought at the time) took a class at her community collage on memoir writing and she kept writing for many years and published her memoirs for family and a few friends. That was before the ease of self-publishing through online companies which may be what I'll eventually do.  I don't expect to turn this project into something as big as Jacqueline's but whatever I do will be treasured by my family.

I'm already doing something similar. When my oldest granddaughter was 7 I started a journal for her, telling about my own life at her age. I have all my old report cards which are included as are little stories and photographs. Sometimes I don't remember anything personal so I write about generalities of living in our small town and about what was going on in the outside world. I was about 7 when my mother and the friend we were visiting heard of the end of WWII on the radio. I remember the excitement of knowing that war had come to an end, and I remember troop trains carrying men and machines as they came through town, heading for war.

So that's the kind of thing that goes in Amy's book as I add more stories every year on her birthday. This year I'll write about me at age 13; that would be this story about Little Jo, the majorette.

Little Jo Leads the Parade
I've always loved music and through the years I took hundreds of lessons... piano, voice, dance, band, choir, though I was too undisciplined to ever do my best. When I was in 6th grade I joined the band and started with the trombone. That instrument lasted only a year until I switched to clarinet, but my main love was marching in the school band. The director asked me to try out for majorette in 7th grade which was fine with me because I could then be in the band without bothering with an instrument until late fall when marching season was over and concert band began. We performed at every game and marched in every parade. What fun!  Then when I was in 11th grade I became the drum majorette and led the parade for the next 2 years. I still like to lead the parade.

-30-
So what about you?  Are you writing your story, or painting it, or making collages about your life, or keeping scrapbooks and photo albums? The time is now!
Posted by Jo Reimer at 5:11 PM