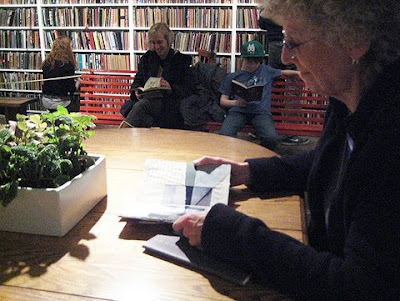 Marge sent me this photo of herself at the Brooklyn Art Library holding the sketchbook which I submitted to the Sketchbook Project. Just look at all those sketchbooks on the shelves behind her. How amazing is that! 28,839 people participated in the project though I don't know how many completed books they actually received.
If you click on the link to the Sketchbook Project you can read more about it.
I enjoyed the challenge of making art on a particular subject in the sketchbook but I don't think I'll do it again. Spending hours and hours doing work that I'm proud of and then giving it away to strangers was a little bit of a struggle, knowing I'll never to see it again unless I get up to Seattle when the books will be on display there from June 10 - 12 at Space/Form Gallery at 2407 1st Avenue, Seattle. But thanks to thousands of participants just like me the exhibit will be a feast for the eyes, an art exhibit like no other.
Other venues:
San Francisco, CA: June 18
Austin, Texas: March 12
Winter Park, Florida:  July 29-31
Atlanta, GA: April 8-9
Chicago, Ill:  July 14-17
Washington DC:  April 11-30
New York City: Feb. 19-27
Portland, Maine:  March 30 - April 1 You can get more information at the Art House website.
Posted by Jo Reimer at 6:13 PM