by Jo Reimer﻿
Last week while walking along our pristine northern Oregon beach we came upon a large piece of styrofoam, about 3' x 2' x 2', mangled and battered like much of the flotsam carried to the westernmost shore on the lower 48. But this wasn't an ordinary piece of  junk; we're pretty sure it's the first of the debris from last year's tsunami in Japan. 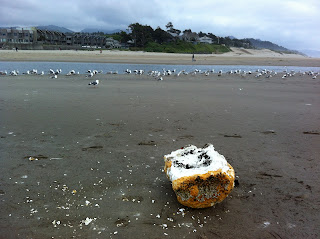 Just a couple of days before our beach discovery we watched a news story from Alaska where quite a bit of debris is appearing along their shores, much like this one, and the yellow and white styrofoam was identified as building insulation.  It makes me so sad... to think about what's coming and why.
I wrote the above last night and now this morning there's a newspaper report and photo of an entire floating dock from the Japanese city of Misawa that washed ashore on Agate Beach, in central Oregon...66' x 19' x 7'! The cleanup of beaches along the northern Pacific will be a horrendous task over the next years. There's an enormous island of debris heading our way as well as countless other pieces.
Sometimes we think that what happens in another country isn't important to us, but it so often affects the whole world.  I remember when Mt. St. Helens blew her top in 1980, coating our farm with several inches of ash, turning our part of the world a sad, dead gray.... and then came the incredibly beautiful sunsets all around the world for the next two years because of the ash in the atmosphere.
I had trouble with the title of the above collage until I remembered that Japan is sometimes called the Land of the Rising Sun. The piece is quite sunny except for the "debris island" which floats down the center.
Posted by Jo Reimer at 8:16 AM